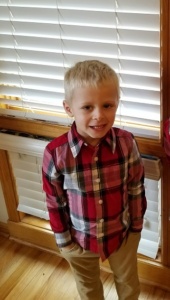 Sam was born a week and 4 days late. Everything about his birth was perfectly normal unlike his older brother. I had the birth I wanted; he was breastfeeding well. For 3 days, life was perfect. Then, we got the phone call. His newborn screen had elevated C3. He had to go to the ER immediately. He did not have any symptoms at this point, so we assumed it was probably just a precaution. The tests at the ER showed elevated ammonia, hypoglycemia, and elevated ketones. He was then admitted to the Children’s hospital. After 5 days, we had the diagnosis of PA. He was discharged and stayed out of the hospital until 7 months old. From 7 months to 18 months, he was hospitalized 9 times for illnesses, exhaustion, and constipation. Most visits were only for a couple of days. After 2 rough hospitalizations, Sam was terrified of any female other than me (we assume because most nurses and phlebotomists were female). That’s when we decided to have a gtube placed. It was the best decision we ever made. He is now 3 and has not been hospitalized since the gtube surgery. Thanks to the newborn screen, he has never had a crisis. He is where he should be cognitively. Physically, he has hypotonia. He had to have therapy to help him learn to crawl and walk, but he still managed to walk by 18 months. In addition to the hypotonia, his energy levels are noticeably less than kids his age. During his yearly heart exam, he was found to have some signs pointing to future development of cardiomyopathy.  It is too early to do anything about it so for now, we are just monitoring that.

Overall, Sam is a happy and thriving 3 year old. He is all boy and loves guns and superheroes. At the same time, he can be very sweet and loving. He also loves to eat especially chips and anything fried! We are so thankful for him and for all the doctors and friends who have helped us through our journey so far. Sam is only doing well because of our PA community and his wonderful metabolic doctor. No matter what the future holds for him we will continue to trust God and rely on him to get us through the tough times.

That’s Sam’s story. Thanks for all you guys do to help with PA.