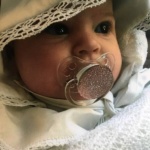 Evelyn Blade was born and everything seemed to be great. We took her home after 2 days and once home, she refused to nurse. I tried and tried and she would not stay awake long enough to latch. We thought it could be I just didn’t have any milk so we tried formula and she refused that also. We tried giving her a bath and she stayed asleep and throughout the first night her breathing became labored. The next morning we went to her Dr. to make sure everything checked out ok. The Dr. said that the symptom’s were “off” and sent us to Children’s Healthcare of Atlanta  to make sure nothing was wrong.
Once we checked in to CHOA’s ER, they quickly narrowed down what she had to 3 things: Meningitis, an infection, or a metabolic issue. She was put on a ventilator because they didn’t want her to get tired and stop breathing on her own since she was so small. After 4 hours of test, we were sent to the PICU with the diagnosis of a metabolic disorder.
We were greeted  by 15 people wanting consent for PIC lines and procedures along with 2 Genetic Drs. We were taken to a room where we were told that Evelyn was extremely sick and if they couldn’t get her ammonia down they would have to do dialysis and that sometimes they couldn’t on a baby that small. So basically, to not expect a great outcome. We were also told that if she did live through this, she would be severely handicapped.
That night, she started to have seizures and it was decided that dialysis was the only option. After 5 hours, her ammonia level started to rapidly decrease and she started to get better.  Her seizers stopped the next morning right after she was baptized (praise the Lord) and she started to drastically improve. We were told we would be in PICU for at least 4 weeks, if not 6.  Evelyn proved those Drs wrong. We were out of PICU in 1 week and spent a week in NICU step B getting the hang of her new diet.
Evie Blade is now 4 months old and blowing everyone away. Her diet team is amazing and I update them on her weight weekly so we can make sure she is getting the correct mix. She currently eats 21 oz of breast milk, 20 gms of Proprimex and 5ml of L-carnitine. She also eats 6, yes 6!, tablespoons of rice cereal. She eats everything by mouth. We have the tools to put an NG tube in incase she gets sick (we have had to do this 1 time for 2 days when she got a cold)
I have spoken to her dietitian and we think she went into crisis due to starvation and should be able to handle a decent amount of protein. We have her evaluated by a PT/OT person to make sure she is developing correctly and so far she is. We are aware that due to the seizure and crisis she was in, she might have learning disabilities, but when they come up, we will deal. Hopefully with early intervention, we can make her life as normal as possible.
We had Evie Blade via IVF. Because of this, we still have 8 frozen embryos that are all excellent quality. We plan on getting the 8 tested for the PA gene (we know Evelyn’s – she has 2 mutation, 1 only 1 person has reported having the other no one has reported having). The embryos that come back positive, we plan on donating for research specific to PA.