It has been four years since I have written an update on Chase.  He is 22 years old now and I am happy to report he is doing great and staying healthy during this very difficult time of the pandemic.

During these past four years Chase has required two hospitalizations.  In April of 2017, Chase became very ill with pneumonia.  He was on a ventilator for three weeks.  We weren’t sure he was going to make it, but Chase is a fighter and we had so many people praying for him.  Many of you were part of those prayers, and I cannot thank you enough.  He has been metabolically stable for the most part except, of course, when he is ill.  In addition to the genetics doctor and the neurologist, we are seeing a cardiologist for long qt syndrome. We also see a nephrologist and learned recently that his kidneys are only functioning at fifty percent.   Despite these challenges, Chase remains relatively healthy.

Chase graduated from high school last spring.  It was so exciting for him.  I loved his school so much, but it was time for him to move on.  The biggest challenge was finding an appropriate program for him post-graduation.  I was able to find a program that could support all his needs and was able to obtain the funding for the program.  That was a huge relief!

Chase is such a happy person and brings a smile to everyone he meets.  He loves getting the birthday cards from the warrior birthday club.  He enjoys spending time with his family, especially, his older brother Kyle.  He likes to watch sports on tv and really enjoys going on walks being pushed in his wheelchair.  He is able to walk on his own but he tires pretty easily.

I hope that during this very difficult time all of our family members remain healthy.  It is such a scary timebut having an organization like this is so helpful. I cannot thank the PA foundation and the OAA enough for everything they do. 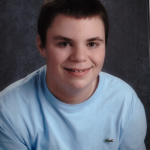 Hello everyone, the last time we had put out an update on Chase, he was ten years old. He will be turning 18 next month!  I can’t believe how the time has flown by.

Chase has grown into a handsome young man. He has really lost a lot of baby fat and has gotten leaner and taller.  We have had to make adjustments with his formula along the way, but, overall, Chase has been doing really well.  He still does not eat anything by mouth except drinks of water.

He currently is a junior at a special education school. He started this school as a sophomore.  This was such a great change for him.  We tried the program at our local high school, but, it just could not meet all of Chase’s needs.  Also, it had 2,000 students, whereas Chase’s current school has 200 students.  The program he is in is wonderful.  They are really teaching him life skills, and they have a sheltered workshop on sight.  Chase has certain jobs he must do every day.  The students, along with the staff go out into the community once a week.  He, also, receives speech/language therapy, occupational therapy, and aba therapy.

Chase has not been hospitalized for at least five years. Any sickness he has gotten, we have been able to control at home, including a stomach bug.  We have, also, finally have had Chase seizure free for 6 months.  He is on three medications for his seizures, and they have really controlled them well.

Chase’s physical strength has definitely declined over the years.  The doctors want to rule out everything, so a MRI is planned for him soon.  He has been fitted for orthotics and this has helped a great deal with his walking.  He gets fatigued very easily, and sometimes requires a wheel chair.  This is so strange for the boy that when he was younger, you literally had to “chase” him everywhere.

Overall, Chase is very happy. He really enjoys his books, his certain music toys, and watching sports on tv.  He likes to spend time with his family especially his big brother Kyle when he comes home from college.  He enjoys his extracurricular activities of basketball and baseball, he may not always participate, but he really enjoys being a spectator!

I feel very blessed to be Chase’s mom. He is such a special kid.  I am, also, very grateful for the PA foundation, as well as, the OAA. 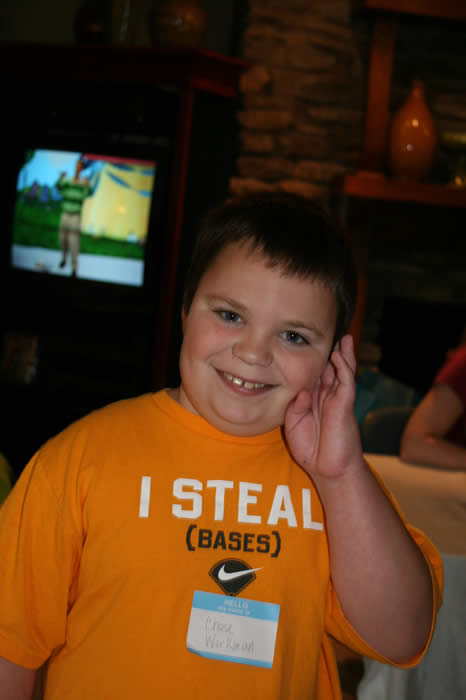 Our son Chase was born March 19, 1998.   He was our second child and my husband and I were so excited because we were having another boy and Kyle, our older son, was going to be a big brother.   We had no idea what was ahead of us.  Chase’s story is so familiar to all PA families.   By Chase’s third day of life, I knew something was not right.    He would not breastfeed and his breathing was very labored.  I also noticed an odd smell on him when I held him close.  It was late at night and I alerted the nurse, but she just thought I was tired.  I insisted that he be taken to the nursery for the doctors to check him out.    I remember calling my husband telling him Chase was very sick and this was before anyone told me what was wrong.  I just knew something was wrong with him.  As a mom, you just know.  Sure enough, the nurse came back, and told us that his temperature had dropped to 95 degrees and he was acidotic.  Of course, I did not know what that meant.  Fortunately, we were in a very good hospital and they immediately started giving Chase medicine that would help him, especially with his ammonia.  They did have to transfer him to St. Louis Children’s Hospital, but by Chase’s fifth day of life, the doctors at Children’s hospital were very sure he had Propionic Acidemia.   My husband and I, of course, had never heard of it.  I just remember asking God to please spare our son so my son Kyle could have a little brother.

Now Chase is 10 years old.  We can’t believe it sometimes.  In the beginning, the doctors were very guarded on Chase’s prognosis because he had an early onset case of PA and not a lot was known.   He has been hospitalized so many times we have lost count, but as he has gotten older, those hospital admissions have decreased.  He has just recently started having seizures again, but besides that his PA is very much in control.

Chase is such a sweet boy, he brings so much joy to our lives.  He is developmentally delayed, but he is making strides every day.   He really lives up to his name, by the time he was walking at 18 months, we were definitely “chasing “him around and have been ever since.   We are so thankful to all the OAA families and the PA families for all the support and advice.  With this disease, you can really start to feel alone, but it is such a blessing to be able to connect with other families.     This past year, we went to our first PA family day, and we had such a good time.  It was so nice to be able to talk to other families about g-tubes and other stuff and know that other people totally know where you are coming from.

We would love to talk to other families.